Social Media Breakfast Minneapolis St. Paul ( #SMBMSP ) met at Imation Headquarters in Oakdale, MN on November 20th for another round of networking and learning.

GoGirl, a new product line, utilizes social media and the occasional MINI Cooper to market a unique feminine product.   Shareology was impressed with the strong branding,  including the product name GoGirl.  About half way through the presentation, it dawned on Shareology that this is not the first time she has run across this product.  Given the events of October  10, Shareology has been doing a LOT of reading; I’ve already plowed through all seven Harry Potters:  again.  Currently I’m rereading Tales of the City by Armistead Maupin, which includes a “female funnel” received by one of the main characters, Mary Ann Singleton, as a component of her job at a San Francisco TV station during the 70’s.  Maupin has written a fascinating seven books about this time period; what he did not do was brand his novelistic female funnel as GoGirl!

Kristi Kottschade and Lenore Hoolihan at Imation Headquarters for SMBMSP #21 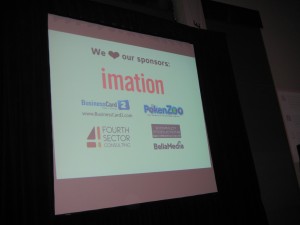 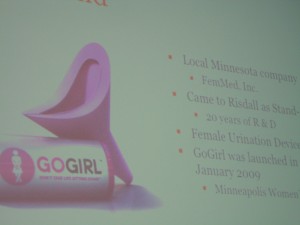 Shareology guesses this may be the most unusual product @MyklRoventine has ever given away...

What better way to end SMBMSP #21 than with a smiling Amy Bryant?

Next time (December 18 at Open Book) remind Shareology to get a seat by the projected Twitter stream:  so cool!

A tip of the social media hat to Rick Mahn and Mykl Roventine for another high quality event!

Just a quick note about some coming attractions on Shareology….   So many of you have clicked on “A New Shopping Center in 2009?  Are they Mad?”  that an update  is in the works.   Key store and restaurant openings in West End make a return visit by Shareology and her camera a must.

Shareology also scored her ticket to Social  Media Breakfast Minneapolis – St. Paul #21 a week from today at Imation headquarters in St.  Paul.   Looking forward to a great content session and ever fun shots of social media geeks at play.   SMBMSP is one of the most satisfying groups Shareology has ever been a part  of  (unless you count Alpha Psi Omega, the drama fraternity, and Shareology does!!)

So enjoy your Friday the 13th;  see you back here in the next few days with more retail and social media news, pictures and general frivolity!